Diccionario de anglicismos del deporte (Dictionary of Anglicisms in Sports) analyses the influence of the English language on European Spanish in the domain of sport, which has become a major social phenomenon whose expressions penetrate everyday language thanks to the prestige, cultural power, expressive rotundity and universality of contemporary English.

The dictionary has an extensive introduction describing the trajectory of English in linguistics, sport institutions and mass media, besides the traditional and innovative attitudes that have influenced the adoption of necessary neologisms, as well as their journalistic uses, the editing of multilingual works and historical documentation, and the anglicization of European lexis. It conducts a documented tour of the 19th and 20th centuries highlighting lexicographic work in Spanish of encyclopedias, professional and sport institutions, such as the International Olympic Committee, the International Council of Sports Sciences and Physical Education or FIFA, concerning their organization of knowledge and promotion of cultural dimensions, alongside the proper use of sport terminology in dissemination through the media and new technologies, multilingual work for translation and interpretation, and related activities of the Association of Academies of the Spanish Language and the Royal Spanish Academy for the study of this domain and incorporating their words in various types of dictionaries.

The lexicographic core of the dictionary consists of over 2,100 entries, including 2,457 meanings related to 95 Sports and associated activities. The entries include information on morphological variants, phonetic transcription, sense definitions, quotations, and the equivalents in Spanish. The corpus refers only to European Spanish and the illustrative quotes have been obtained from more than 200 documentary sources, mainly the media, both general and specialized.

Due to their form or etymology, the words that are registered are perceived as English by the public, including terms and forms with non-existent uses in English, such as footing (from foot ‘pie’) for the English ‘jogging’, or hybrids of humorous origin, such as puenting (‘bungee jumping’) or sillón ball (literally, ‘chair ball’), which are highlighted for the attention of translation specialists.

Other features include thematic marks (e.g. mont ‘montañismo’, srf ‘surf’, vol. ‘voleibol’), bibliographic documentation of lexical repertoires where an Anglicism has first been registered and its presentation in chronological order, and citations to exemplify the use of each anglicized voice. Furthermore, in the case of different registered variants, whether standard or stylistic, such as football, soccer, fulbol, the reference to the main term or to the most anglicized one is indicated.

The definitions and explanations that are provided with such an extensive repository of expressions offer solutions, guidelines, advice and alternatives to those dealing with journalism, translation, teaching, proofreading, translation and interpretation, in addition to valuable information for practitioners and fans as well as language historians and philologists.

The dictionary includes data that are already obsolete in European Spanish, such as  ‘linesman’ (juez de línea) and others recently coined terms such as ‘VAR’ (árbitro asistido por vídeo, from ‘videoassisted referee’). There are also some figurative and picturesque uses such as penalti ‘marriage of a man in a forced way and in haste’ (as a punishment or ‘penalti’ for getting a woman pregnant, a custom that was common during the Franco  dictatorship, similar in its connotations to the old British English idiom ‘shot wedding’).

The bibliography covers 47 literary works, 94 dictionaries and linguistic publications, and 3 databases. It is followed by an appendix on graphic and orthographic aspects of anglicisms in Spanish: use of initial uppercase and lowercase letters, typographic use of round and italic letters, and other aspects related to abbreviations, acronyms and orthographic signs, such as quotation marks, the apostrophe and the hyphen. The annex contains 19 bibliographic references on journalistic language. 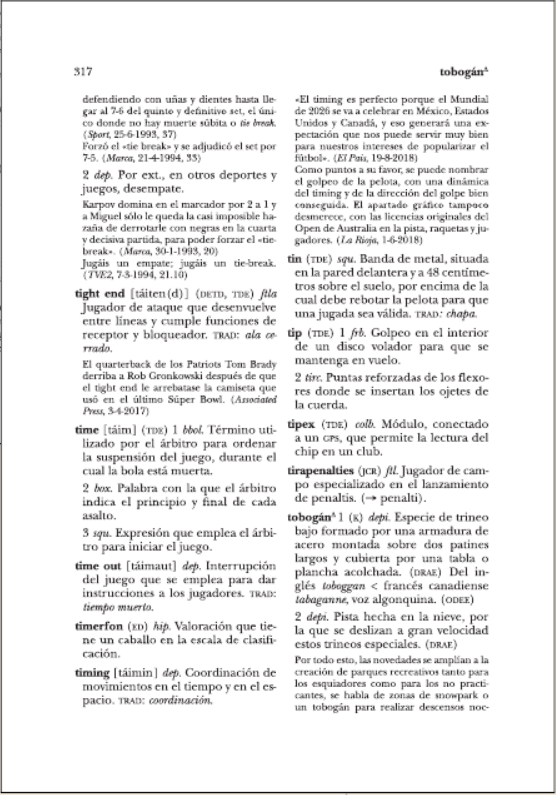 Félix Rodríguez González is Professor of English at the University of Alicante and has a PhD in Romance Linguistics from the University of Alberta. His research focuses on lexicology, lexicography and sociolinguistics of English and Spanish, and he has compiled various dictionaries of anglicisms and is the author of over a hundred publications in national and foreign periodicals and books.

Jesús Castañón Rodríguez has a PhD in Hispanic Philology from the University of Valladolid and teaches Spanish Language and Litrature. He has collaborated with the Real Academia Española and the International Baccalaureate organization on the revision of sport terms in dictionaries, and is author of monographs and book chapters on sport language and culture.